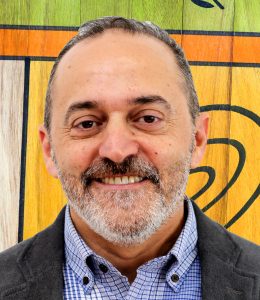 B.Sc. in Chemical Engineering from UTN (Argentina), M.Sc. in Chemical Engineering and PhD and MBA from Technion – Israel Institute of Technology. In 1998 he joined Rafael Ltd., where he led 50 researchers in the area of high temperature batteries. In 2007 Prof. Dekel co-found CellEra, where as VP for R&D he led 15 researchers to develop the Anion Exchange Membrane Fuel Cell technology. In 2015 Prof. Dekel joined the Technion, where he heads the TEEM Lab (Technion Electrochemical Energy based on Membranes), leading the largest wordlwide research group on AEMFCs. Prof. Dekel hold more than 50 patents and papers on battery and FC technologies. He currently holds about $4M goverment and company research grants from Israel, Europe and USA.

Anion exchange membrane fuel cells (AEMFCs) can potentially revolutionize the energy generation market; however, to be seriously considered as a real alternative to the mainstream fuel cell technology, complete removal of previous metal electrocatalysts needs to be achieved. While in cathode electrodes platinum can be easily substituted, the electrochemical hydrogen oxidation reaction (HOR) in the AEMFC anodes currently involves prohibitive overpotential losses, making the removal of platinum extremely challenging. Understanding the HOR in AEMFCs will facilitate the path to overcome the challenge and finally develop and demonstrate platinum-free high-performance AEMFC devices. 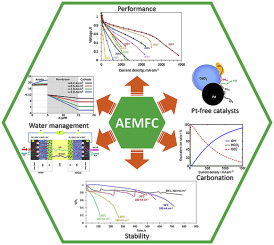 Anion exchange membrane fuel cells (AEMFCs) have recently received increasing attention since in principle they allow for the use of non-precious metal catalysts, which dramatically reduces the cost per kilowatt of power in fuel cell devices. Until not long ago, the main barrier in the development of AEMFCs was the availability of highly conductive anion exchange membranes (AEMs); however, improvements on this front in the past decade show that newly developed AEMs have already reached high levels of conductivity, leading to satisfactory cell performance. In recent years, a growing number of research studies have reported AEMFC performance results. In the last three years, new records in performance were achieved. Most of the literature reporting cell performance is based on hydrogen-AEMFCs, although an increasing number of studies have also reported the use of fuels others than hydrogen – such as alcohols, non-alcohol C-based fuels, as well as N-based fuels. This article reviews the cell performance and performance stability achieved in AEMFCs through the years since the first reports in the early 2000s.

Anion-exchange membrane fuel cells (AEMFCs) are attracting increasing attention worldwide mainly due to this technology’s potential to considerably reduce fuel cell device costs. However, their development and implementation is significantly handicapped by the membrane and ionomer’s decomposition during cell operation. In this study we propose and apply a unique one-dimensional model capable of predicting, for the first time, the performance stability of AEMFCs. The model accounts for the ionomeric material degradation and its relationship with local hydration, which depends on cell material properties, design parameters and operating conditions. Using this model, we successfully demonstrate the strong impact of operating current density and membrane characteristics on the performance stability of a representative cell. The predicted cell stability provides critical insights for the design and development of highly stable AEMFCs. By using membranes with achievable targeted properties, the model predicts an AEMFC life-time higher than 5000 h, suitable for automotive applications.

Here we present a novel methodology to measure the alkaline stability of anion conducting polymers to be used as anion exchange membranes and anion exchange ionomers for fuel cells. The new ex situ technique simulates the environment of an anion exchange membrane fuel cell (AEMFC) during operation, where nucleophilic and basic OH– species in the absence, or with a scarce amount of water, attack the functional groups of the ionic polymer. Using this technique, we clearly show the critical effect of water molecules on the alkaline stability of quaternary ammonium (QA) cations commonly used as functional groups in AEMFCs. The results show that as the water content is reduced, the QA cations are more rapidly degraded in the presence of OH– at room temperature. With an increasing number of water molecules solvating the hydroxide, its nucleophilicity and basicity are hindered, and the QA degradation is significantly slowed. These results indicate that the currently used aqueous alkali ex situ tests to measure anion exchange membrane (AEM) stability may lead to false positive stability results where anion conducting polymers may appear more alkali stable than they really are.

In the past 5 years, advances in anion-conductive membranes have opened the door for the development of advanced anion-exchange membrane fuel cells (AEMFCs) as the next generation of affordable fuel cells. Several recent works have shown that AEMFCs currently achieve nearly identical beginning-of-life performance as state-of-the-art proton exchange membrane fuel cells. However, until now, these high AEMFC performances have been reached with platinum-group metal (PGM)-based anode and cathode catalysts. In order to fulfill the potential of AEMFCs, such catalysts should in the near future be free of PGMs and, eventually, free of critical raw materials. Although great progress has been achieved in the development of PGM-free catalysts for the oxygen reduction reaction in basic media, significantly less attention has been paid to the catalysis of the hydrogen oxidation reaction (HOR). The much lower HOR activity of Pt in basic media compared with that in acid was itself revealed only relatively recently. While several PGM-based composite materials have shown improved HOR activity in basic media, the HOR kinetics remains slower than necessary for an ideal nonpolarizable electrode. In addition, attempts to move away from PGMs have hitherto resulted in high anode overpotentials, significantly reducing the performance of PGM-free AEMFCs. This would be a major barrier for the large-scale deployment of this technology once the other technological hurdles (e.g., membrane stability) have been overcome. A fundamental understanding of the HOR mechanism in basic media and of the main energy barriers needs to be firmly established to overcome this challenge. This review presents the current understanding of the HOR electrocatalysis in basic media and critically discusses the most recent material approaches. Promising future research directions in the development of the HOR electrocatalysts for alkaline electrolytes are also outlined. 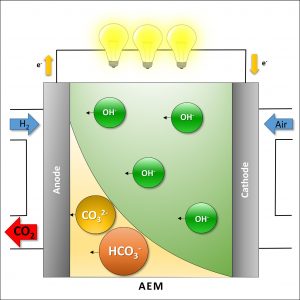 Hydroxide ions in anion exchange membranes (AEMs) are quickly exchanged for larger and less mobile anions (CO₃2− and HCO₃−) when the membrane is exposed to ambient air. Therefore, reported conductivity values of AEMs in hydroxide form are difficult to reproduce, and existing conductivity measurement techniques are not always reliable. Up to now, comparison of reported data for the hydroxide conductivity of different membranes has not been possible because tests have been performed not just with different anions, but also under different conditions and using different methods. In this work we present a practical and reproducible ex situ method for measuring the true value of the hydroxide conductivity of AEMs.
© All rights reserved to Teem Lab